Only just come across this release from last year, but it is one very much worth catching up with. The concept of this album could, I guess, initially come under the description of being ‘an interesting proposition’ since 75 Dollar Bill are a duo from Brooklyn, New York who respectively play plywood crate, maracas, shakers, bells, a drum (Rick Brown) and 12 and 6 string electric guitars, bass, shakers (Che Chen). They are joined by a number of guest musicians:

…and together have developed a sound that is both quirky and very enjoyable. The album consists of four tracks, including two longer numbers that you really get into and two which are great, but I would have loved them to be stretched out even more. Anyway that’s being greedy/ picky because I can always just put the album on again and get something completely different out of it. 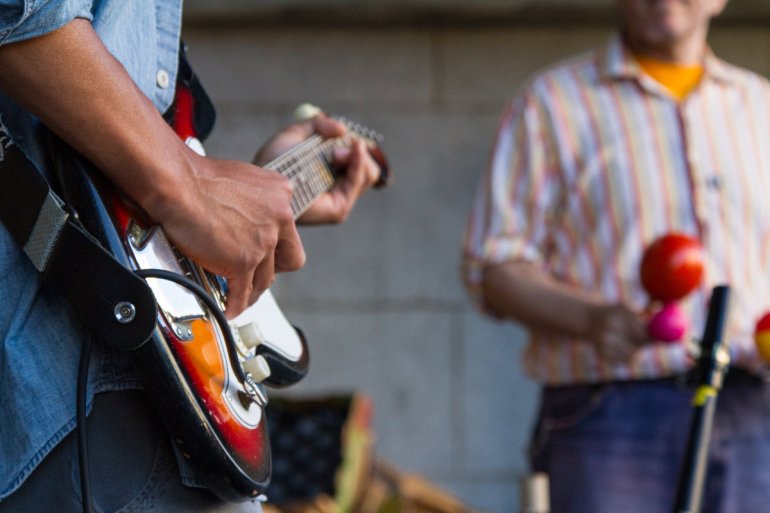 ‘Earth Saw’ is one of the shorter tracks, though still weighing in at over seven minutes. Starting up with a lovely looping riff which builds majestically as the band get into a really hypnotic groove which is totally mesmerising. The use of shakers and maracas is unlike anything I’ve ever heard before resulting in something that is both chilled out and fascinating.

Things move up a gear with ‘Beni Said’. Here you get the same sort of vibe but a little heavier and a little faster. What I like about this is that there are so many musical elements combining here to produce something that is kinda folky without being folk music per se, psychy without being psych music as such…if I were to place the sound here I would say that there were some similarities with some of the Swedish Progg bands of the 1970’s such as Träd Gräs Och Stenar and Pärson Sound, along with their contemporary spiritual successors Hills. Yeah that good!

While there is a certain darkness to ‘Beni Said’, the much shorter ‘Cummins Falls’ is lighter and continues the general drift of the album towards more complex mixtures of sounds. Throughout, though, there is a sort of grainy rough texture to the music that gives it a great deal of character and results in a sort of ‘down home’ character which, nevertheless, never falls into being anything remotely twee.

Last up is ‘I’m Not Trying To Wake Up’ which sees the brass instruments coming to the fore, giving the track more of a ‘free jazz’ feel. Within this is still the simple repeating motifs that form the basis of each of the numbers on this album. Around that is the sort of atmospheric improvisation that you would just want to listen too all day. Again the musicians sound well in harmony with each other even where the sounds are dissonant.

For me ‘WOOD/METAL/PLASTIC/PATTERN/RHYTHM/ROCK’ is a real breath of fresh air, the sound of a group of musicians experimenting with different sounds to come up with something that is compelling and transfixing. It is an album that you can fully immerse yourself in and totally loose yourself in the sonic cycles that the band members construct around relatively simple yet effective themes.