One of the greatest things as a music fan is finding a new source of great music whether that be through a band or label, festival or gig, blog or fanzine, Facebook or Instagram . It often seems that I am on a constant search for something new, for the next experience. This usually plays out when a hear a new release and it just wows me, but perhaps even better than that is when I find an album that has been out for some time, but has completely passed me by. Like the sound of a tree falling in an empty forest I wonder if and how this album has previously been heard, and imagine how it might have been for those listening to it for the first time when it originally came out. 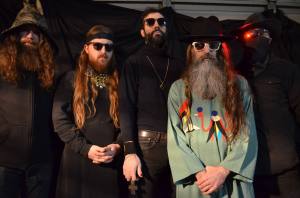 This is how it was for me when I first heard ‘Bardo Abgrund Temple’ by Fungal Abyss. True it is only five years old but I heard it after this years brilliant ‘Karma Suture’ release which made it into my ‘Essential Psych Albums of 2016‘, with another album from Adansonia Records (‘Stockholm Maraton’ by Kungens Män). Actually Adansonia was itself a big find for me this year with the latest release from Cosmic Ground (‘III’) also featuring highly in my estimation.

As a result my first listen to ‘Bardo Abgrund Temple’ could have easily been contaminated by expectations of subsequent time. If that is the case then, in this instance, my high expectations have been well and truly matched. I really rate ‘Karma Suture’ for its long extended and improvised space jams, and its raw live feel. When I heard ‘Bardo Abgrund Temple’ for the first time my immediate reaction was to imagine that I was in the same room with the band while they were jamming. The opening track, ‘Arc of Convenant’ alone is an utterly improvised tour de force. Opening slowly and eerily, yet in a way that feels so immediate the band gradually warm up through a series of forays into the music producing something that begins abstractly but gradually coalesces into an meaningful sonic journey, there are not overdubs here and it is all the better for it. This track is a real slow build for what seems like an eternity although, I should add, it never becomes boring. Then, at around the seven minute mark, things begin to heat up as the rhythm section advances from the back and gradually pounds out a new direction though the music with absolute take off taking place around two minutes later. What comes next is a totally thrilling ride that goes into sonic hyperdrive…just Wow!

Following this outstanding track is something of a big ask, and it is my favourite of the four on the album, but ‘Year of Bones’ benefits from being a different sort of track. If ‘Arc of Covenant’ is an expansive space rock journey, ‘Year of Bones’ is altogether more introspective and claustrophobic track. From the opening bars this feels like a much heavier proposition both sonically and experientially. The heavy almost tribal drumming hangs like a black dog over proceedings as the pace slowly picks up, but remains portentous. Nevertheless, while the track sounds monolithic there is a lot going on within that with not a lick, riff, synth flourish or drone out of place. There are many separate parts put together here which, collectively, meld into something that is at the same time austere and satisfying.

‘Year of Bones’ is an intense listen which is why the arrival of ‘Timewave Zero’ comes as something of a relief even given its doom laden bass line at the beginning. On top of this is a dialogue that feels just tuned out. Tuned out in the way that space communications seem tuned out, but also that hazy lack of focus of a psychedelic experience. In short this track is a total zone out…just sit/ lie back and let the whole thing wash over you and enjoy is strange disjointed beauty.

Final, and longest, track ‘Fungal DeBrist’, begins in a slow and really considered manner. It is here that you can most sense that the band are under the influence of the sacred Teónanácatl mushroom when they recorded this album. The music is really out there; coherent yet you can somehow feel the altered states that the band are experiencing, there is a indefinable power lurking here. This, then, is an intense sonic experience that demands to be listened to, and I am confident that repeated listens will glean more and more from the experience for the listener. This, after all, is a track that does not take off until around sixteen minutes in when it just explodes into an almost indescribably potent sonic encounter.

For me ‘Bardo Abgrund Temple’ has been inhabiting a lysergically infused cave just waiting to be discovered. I imagine that my not hearing has barely effected its existence, but my discovering of it has certainly enhanced mine. It is an encounter that seems to get more spirited with every listen, an encounter that re-affirms the power of music and underlines how, under the right conditions, mind-altering substances can result in intense outpourings of creativity. We can feel relieved/ thankful that a recording of this was made because, by definition, it will never be repeated and it is this lack of formula that is one of the principal reasons why I love this sort of music so much.

‘Bardo Abgrund Temple’ is now up for pre-order with Adansonia Records here, with a release date of January 2, 2017. The album is available as follows:

To make it as enjoyable as possible for others I do pay extra so there are, for instance, no ads on these pages; but it would be great if the blog could pay for itself.

So, if you’ve really enjoyed your visit here and have found some music that you think is amazing, why not buy me a coffee (I write in independent cafés a lot) by clicking the “make a donation” button below.