After a few weeks of really dry, if not totally sunny, weather in the North of England the sky has opened and constant rain seems to be all that we can expect this week. It’s on weeks like this that I feel the need to park the dark drone music that I write about most of the time and listen to something brighter. Thank goodness, then, for this new album from Norwegian garage band Sunshine Reverberation, a band who are very well named. While it is grim outside there are rays of sunny guitar fuzz jangling out of my speakers, warming my soul as well as my mood; and the reverb, well that speaks for itself here. 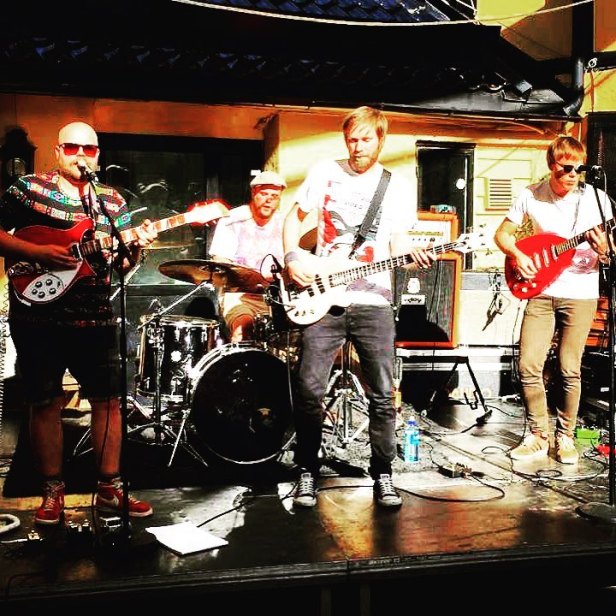 Sunshine Reverberation are a four piece from Tromsø in Norway, that’s the Northern bit so really out there. Which is kind of what this band are too…really out there. It is music that I imagine will warm up the coldest and longest of Norwegian nights. It is music that will put a smile on your face from the very first few bars of opening track ‘Rainbow Eyes’ which positively glides into your ears. There is an easiness to this track that just puts you in such a good mood with its veiled vocals, garage punk ethos and fuzzy foundation.

This sets the tone for the rest of the album, which is not to say that it’s the same all the way through. The guitar ‘Japanese Death Cult’ could have come of the King Gizzard ‘I’m Your Mind Fuzz’ album, although there’s much more ‘Stooges’ to the track overall…a really intense garage punk track which ticks all my boxes for that genre.

Elsewhere ‘Be A Baby’ has a great surf rock feel and segues into ‘Golden Gate’ which is a really good lo-fi number, dirty and raw this really marks the band out as being able to make a proper good racket. ‘Manipulation’ has a great sixties East Coast feel, all the band wading their way through a satisfying fuzz.

Which brings me to ‘Leech Transportation’ a longer and looser track which see the band really let go with some great riffs and a total freak out for the second half of the track…brilliant! After that ‘Sun King’ is a more downbeat ‘come down’ that sees the band pausing for breath, and also underlining that these guys can play. ‘Trees’, though, sees a return to more up tempo themes, a hard pounding track that keeps it tight all the way.

Last up is ‘Death’ which is possibly the most accomplished number here. There is a subtlety here that perhaps maps out where the band might head next. I very much like the melody in the chorus and the way it contrasts with the more staccato delivery of the chorus. There’s a nuance that is welcome, but there again so is the rawness of the rest of the album. Take your pick.

I am sure that fans of bands like King Gizzard, Thee Oh Sees, and of Ty Segall will love this record. There’s no doubt that Sunshine Reverberation are a band that have developed a good raw and tight sound, and can make it more than listenable over the course of an album. Actually I’ve listened to it a number of times now and am continuing to get something new out of it on each occasion, and as if summoned by the fuzz…the sun has finally come out here too.

‘Sunshine Reverberation’ is out now on vinyl, cd and download from Westergaard Records