We nearly all have photographs that we love and occupy a special place in our hearts. They can remind us of important events in our lives, a favourite view or location, and/ or our children at particular ages. We often build up a sort of relationship with certain images, since they give our memories evidence of how things were.

When you are wanting to lose a great deal of weight photos can also take on an added dimension since they can mark that journey from fat to thin, from unhealthy to healthy. Before I lost weight I used to put photos of myself in two basic categories: those that just made me look plain fat, and those with which I could kid myself that I did not look so bad: it was usually the former.

The photo above was one taken by my then four year old son, Jake, in 2012 is one of those pictures that has become very important to me, because it provided one of the catalysts for me to lose weight. I had just come back from a trip to the Olympics in London and I was emerging from the trees in Treptower Park in Berlin, where I had just changed my younger son’s nappy. I hated this picture because of how big it makes me look andbecause Jake took it. Was this really how he saw me?

It was really a picture from which I could not hide and it told me that no matter how much I tried to kid myself I did need to lose weight (I was 315 pounds/ 142 kg at the time). So when, six months later, I did start on my weight loss journey it was a copy of this photo that went on the fridge to remind me of what, I guess, I wanted to run away from; that no matter how much I could try to tell myself otherwise, I was overweight and I did need to lose.

In the two and a bit years that it took me to lose the 95 pounds/ 42 kg I looked at that image a lot. I used it on my charity giving page (I have raised over £1800 for cancer charities as part of my weight loss challenge), and it was my ‘before’ picture once I had achieved my target weight.

So what do I think of this photo now? Well I think the first thing to say is that there is a lot of shame tied up in this picture. The shame of being fat, of somehow being selfish, especially to my family. It is not a photo I enjoy looking at, but it is still on our fridge and it does represent something; what I tend to call ‘the old me’. This is also confusing, because it is still me, and I am definitely projecting a lot of negativity on this photo (which I have been known to shout insults at).

This photo, then, is for me an uncomfortable reminder of what has been a pretty much life-long struggle against weight gain. It reminds me of all the ‘bad’ things I used to do which were unhealthy, and it serves as a reminder of the dangers of sliding back in that direction. But, as I write this, I also think that I need to guard against somehow demonising ‘the old me’, and need to be more compassionate to myself too…its an ongoing process and something that I am only just coming to terms with.

As I am discovering, then, losing weight does not end with reaching the target weight. It is not just about maintaining that weight either. It is also about how I see myself, and think that others see me. The photo below is of me wearing the same trousers as in ‘the photo’. It is an altogether more happy image for me (and I actually like to have my photo taken now), but if you asked me where I was in terms of my identity I have still not got to the ‘after’ shot. I am still somewhere in between, still trying to get away from the ‘before’ image. Getting there will no doubt take time, and writing this blog, for me, is part of that process. 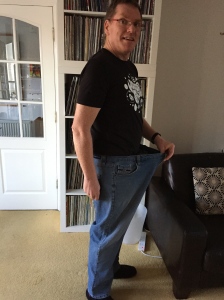 2 thoughts on “The Photo”