Psych Insight roving reporter stAn has been living it large in Berlin. While there he caught up with self-described ‘weird post-punk band Kamoos who showed him round that great city and answered a few questions along the way.

Take it away stAn…

In the never-ending quest to find the best, the newest, the strangest, (delete as applicable) sounds from the post-punk scene, we found ourselves chasing Bowies ghost round Berlin with the lead singer of (as they describe themselves) weird post-punk band Kamoos…

stAn: Tell me more about the band. Who’s who? and where you all from?

Me (Juliette) and Vivi met around 4 years ago, here in Berlin. I was with my friend Maggie (from the Maggie’s Marshmallows) in line for what used to be Bassy Club when Maggie pointed Vivi out as “the singer from the Mokkers”. Me and V got to chatting and Vivi ended up putting on a show for Juliette & the Sin (my old London band). Since then we’ve been pretty inseparable: we call ourselves the ‘married couple’. Felix we met a little later, through our music circle. He’s the daddy of the rehearsal space we use and a bang-on drummer so we asked him to join and now we’re a happy family

stAn: You describe yourselves as ‘weird post-punk’…

Kamoos/Juliette: Yes. Dissonant riffs, strong vocals, darrrrk. There’s not much out there to compare us to as we’ve got our own sound, but imagine post-punk vibes like Malaria, Olimpia Splendid and The Fall with the depth, sometimes surfy-vibes and strong vocals of Shocking Blue. Weird post-punk!

Kamoos/Juliette: Our name comes from when I was younger, and I went through my existential literature phase. One of the books that was important to me was The Fall by Albert Camus. I though “great name! I’ll call my band that” (I was around 16 at the time). Unfortunately, the name was, of course, taken by probably one of the best bands in the world. So instead, I turned Camus into Kamoos by adding a bit of moo (always good to add a bit of moo….) and voila! now it means whatever you want it to mean. As long you are Kamoosed!

stAn: How long have you been together as a band?

Kamoos/Juliette: Kamoos began just over a year ago with a different setup. It was me (Juliette) and Vivi, and then Tanno (Jolly Goods) on bass and Tom (Hekla) on drums. Felix joined around half a year ago. The first rehearsal as Kamoos was interesting: loud and everything played and learnt at double-speed. We had set up a gig set-up pretty early, so we didn’t have much time to learn the songs.

stAn: I take it you all either played, or play in other bands too?

Kamoos/Juliette: Yes: as I mentioned, I was in Juliette and the Sin, Vivi was in the Mokkers and plays currently in Voodoo Beach, and Felix plays for Imaginary French. With Kamoos, we make something a little different, bringing a little from each of our projects and warping it into a totally new, different, unique shape: Kamoos.

stAn: There must be some kind of common bond that brought you together as Kamoos…

Kamoos/Juliette: Yes, me and Vivi bonded over Country Teasers. It was a moment when I gave her a Country Teasers record because that’s kind of my marker for how far a music relationship with someone can go. And she loved it. Thank god. We also used to hang out in the same pub in London – back when I lived there and she was staying for a while – called the Queens Head. The Fat White Family (who I used to be friendly with and played a few shows with) used to play there every week and turns out we were both at the same gigs. With Felix it was more just a natural bond over how we play together: he really understands the music and song-writing process and comes up with some pretty clever ways to tweak a song. It just works.

stAn: You mention Country Teasers as a common bond, is that the kind of band you’d say you draw your influences from?

Kamoos/Juliette: The bands that have influenced us most are, Country Teasers:because Ben Wallers is totally his own person, his riffs are a little messed and uncomfortable, his lyrics are warped, and he just doesn’t give too much of a fuck.

M.I.A andPeaches:because they’re punk without playing Punk music, they don’t abide by the classic ‘anti-male’image and their music is sometimes really good (not always….)

stAn: How about growing up? Do you come from a musical family?

Kamoos/Juliette: Not realllllyyyyy. As in no one else played an instrument or made music really. Me and my dad used to sing together in the car but that was about it. But yeah, my mum was a Doors lover and my dad a big Beatles fan, so I grew up with a lot of that. And classical music. Which I never got into…

stAn: Berlin’s got a great post-punk/psych/garage scene with plenty of gigs and events taking place every night. As a band where are you most at home? On the stage or in the studio?

Kamoos/Juliette: Right now, we’re definitely a live band. But I think getting in the studio more and more will develop our music so I think that’s about to become important..

stAn: Ah OK. Do you have something in the pipeline?

Kamoos/Juliette: X-Ray Me. A single off our debut EP about to come out at the end of this year.

X-Ray Me was the first official Kamoos song and it still stands as our core track. It’s uncomfortably dissonant, abstractly sexy and encourages mind-trippage.

We originally recorded itin Kreuzberg here in Berlin but we’re re-recording it now in our friends’ studio as the other place didn’t get our sound. We’re due in the studio at the end of July.

Kamoos/Juliette: It starts with mostly me writing the material and bringing it in to the band, but now we’re all going into the studio and writing together. The tracks now tend to be born from spontaneous jams that we find a hook in and work that out into a tune. 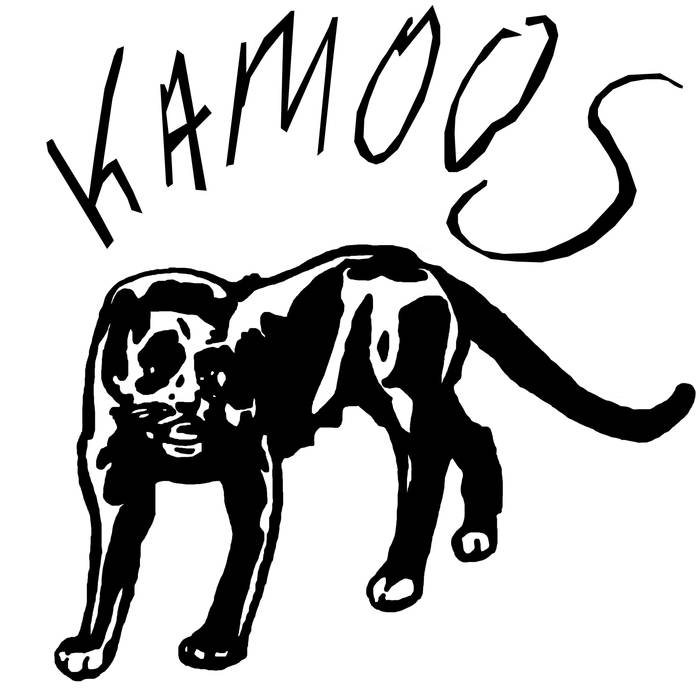 stAn: I really like the ‘Kamoos panther’shirt. How important is imagery to the band?

Kamoos/Juliette: I would say semi-important: important that it’s not a false image of some other person’s idea of what we should use but rather something that we feel and make ourselves, but also it isn’t as important as the music (by far).

stAn: How do you choose it?

Kamoos/Juliette: Pretty spontaneously. If something catches one of our eye, we show it to the others and if it sticks, it sticks. We try not to overthink things.

stAn: You said earlier you were more of a live band, how would you describe your live set?

Kamoos/Juliette: Loud, dark, engaging, dissonant and usually sparks the odd nutter in the crowd to come up and do something strange like punch my guitar or steal my mic or try tohave long conversations with Vivi whilst she’s playing…

Kamoos/Juliette: Kamoos’ first gig was at Spud Bencer: a basement venue under a burger joint in Berlin. We played with Aemong and had Taishi (Fat Whites) DJing for us. Was a messy night – musically and generally – and was packed. A lot of fun but not our best performance!

stAn: Do you have a favourite gig you’ve played?

Kamoos/Juliette: Ooo tough one. We went on tour beginning of this year and a few of those shows were great. I enjoyed our gigs in Halle and Munich because the crowd were messing around and just generally having a good time. They were left-wing venues setup by young people and so felt more honest than a lot of other gigs.

stAn: And I’ve got to ask; the worst?

Kamoos/Juliette: Uhh don’t know. Maybe the one we played in Manheim? Just cold and a bit dark. All the bar tenders and sound engineer called in sick so we were alone with the venue owner doing everything.

stAn: Your obviously very fond of the track X Ray Me, what other songs of yours do you think particularly stand out?

Kamoos/Juliette: Grenfell, X-Ray Me and Ice Cream. They get the crowd going. We have a new one that we’re going to unleash soon which is going to be a banger live! Come to our next show and find out what is it…

stAn: Maybe I will. Where’s It at?

Kamoos/Juliette: Internet Explorer on July 26th with our mates, Human Music, from the UK who are coming up especially.August 10th-11th at Mellow Fest.Rock am Löschteich onAugust 25th. All in Berlin.

stAn: Cool. What other plans do you have going forward?

Kamoos/Juliette: We have gigs and festivals coming up, recording our debut EP (with the single X-Ray Me on it), and we’re shooting a music video for X-Ray Me. We’re also going to be writing more material and would really like to play some UK shows 😉

stAn: Well fingers crossed we’ll be seeing you in the UK pretty soon and we look forward to seeing the video. Do you have one last thought?

You can keep up to speed with all things Kamoos at..

If anyone wants to get in touch with booking the band for a gig hit them up at kamoosband@gmail.com

To make it as enjoyable as possible for others I do pay extra so there are, for instance, no ads on these pages; but it would be great if the blog could pay for itself.

So, if you’ve really enjoyed your visit here and have found some music that you think is amazing, why not buy me a coffee (I write in independent cafés a lot) by clicking the “make a donation” button on the sidebar or footer depending on your device.