It seems a long time since I was grooving to the distinctive beat of ‘Østro’, the Lay Llamas first album for Rocket Recordings. That was at the label’s showcase night at the 2014 Liverpool Psych Fest, a night that I described at the time as  “the very pinnacle of my live music experience“: a statement that I stand by nearly four years later. The Lay Llamas set convinced me to buy that album, which has had regular plays on the Psych Insight turntable ever since. I have always liked how it seems to contain many influences without being beholden to them. It seems to drift in its own little cloud, and has retained its own unique appeal for me.

There have been other Lay Llamas releases since then, but none for me have quite matched that moment in time that ‘Østro’ did: until now that is. However, the only thing that that collective have in common with the current group is central character Nicola Giunta, who has assembled a new set of musicians (twelve contribute here) to produce ‘Thuban’. 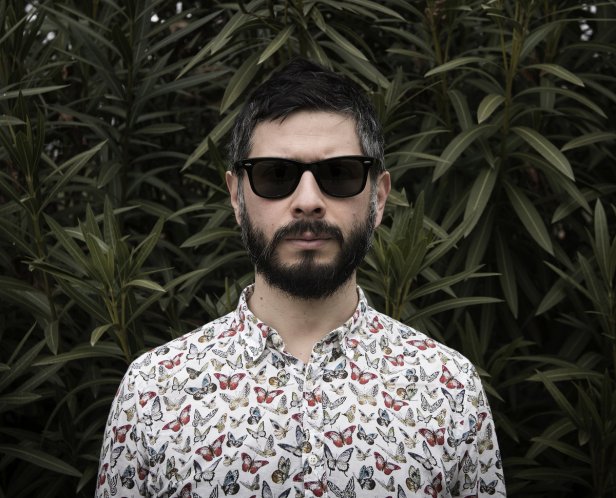 Like ‘Østro’ ‘Thuban’ deals with big concepts and as such feels like a substantial piece of work even before I sit down to listen to it, as the press release says of the album:

It’s as much a voyage of discovery for himself (Giunta)  as the listener, as he reveals, both stylistically and creatively. “Everything around us is transforming, always! You know, I’m not a proper songwriter, I consider myself a sound crafter. An experimental alchemist of sounds and visions. And sometimes I start with an idea and finish with something really different”

This is something that really comes across when listening to this set of songs which both well arranged and somehow seem to hover in front of you on some sort of sonic stage.

‘Thuban’ opens dramatically with ‘Eye-Chest People’s Dance Ritual’ which immediately takes us into what feels like some sort of dream-state as the melody hits straight away and the dense psychedelic mix really pulls you into the sound. It is a very strong start for me and fills me with promise for the rest of the record. This is certainly borne out by ‘Holy Worms’ with it’s funky beat and cool refrain which I imagine will really get me up and moving if I get to see it performed live. This is followed by ‘Silver Sun’ which immediately feels more experimental, a hark back to some early 80s electronica (although that might just be because that what I’d been listening to prior to writing this). Whatever, I don’t think I’m far from the mark, and then as the sax moves in this track just takes of. Absolutely fantastic mix of styles here which suggest chaos and resolution, this is where the album really kicks off for me.

Things slow down a bit with ‘Cults and Rites from the Black Cliff’, which features Clinic and feels much more meditative and considered. As such this album is shaping up to be something of a winner with a variety of styles around what I guess could be described as a common feel of inclusivity, bringing in musical styles from around the globe; most obviously afrobeat. This feeling is confirmed with ‘Altair’, which feature Goat in a manner that you would imagine. In fact it sounds like it could have come from one of the early Goat albums, and nothing wrong with that.

‘Fight Fire With Fire’ takes the album is somewhat of a different direction with a spoken word from the Pop Group’s Mark Stewart. This dystopian track develops science fiction-style narrative making political points about a world where human of genetic variance are pitched again each other. It is intense and sinister… you really need to listen to it to understand the full drama here. After that ‘Chronicles From The Fourth Planet’ might have struggled for impact, as it is it takes the album off in yet another direction, again with a highly inclusive approach which utilises a tabla beat which gives the track a feel as if from the India sub-continent. Once again you get that feeling of the music hovering just in front of you through a mixture of the vocals and otherworldly instrumentation which gives the track, and a great deal of the album, it’s extraterrestrial feel.

Finally, ‘Coffins On The Tree, Black Braid On Our Way To Home’ is a much softer and more melancholic song which feels like the end of a journey in which calm finally descends but seems to fit in with Giunta’s quote from the press release, which really helped me to understand the album:

“That extremely south part of the Europe represents the main gate for a lot of people that coming from Africa, Asia and the Middle-East. A real cultural melting process is on the way. And there’s not any kind of fascist law that can stop this. Thuban talks about ancient sea travels, ancient cultures, ancient rites, but also about today’s travellers, travellers from all ages. Travellers that are still looking for their Thuban, for their polar star to reach a safe place to live with their family.”

With ‘Thuban’ Lay Llamas, or Giunta more precisely, has moved beyond Østro and created an album which in many ways shares it’s DNA, but has developed a much more varied and more complex sound as a result. This album really does stretch out in front of you and mesmerises you with its sincere eclecticism and wide sphere of influence. This is an album that you can dance to, but also sit down an cry to. It’s everything that a modern psychedelic album should be, one with heart and soul, beats and fragments; it certainly meets my criteria of being weird, challenging, chaotic and nebulous… and I can say nothing more than that.

To make it as enjoyable as possible for others I do pay extra so there are, for instance, no ads on these pages; but it would be great if I could recoup that money back.

So, if you’ve really enjoyed your visit here and have found some music that you think is amazing, why not buy me a coffee (I write in cafés a lot) by clicking the “make a donation” button below.